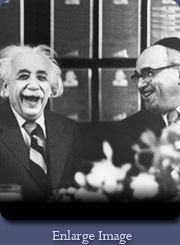 Albert Einstein’s life describes an arc from obscurity to professional Success to worldwide celebrity. A hundred years ago, in 1905, working as a patent clerk, Einstein composed not only his PH.D thesis but five remarkable papers, four of them published that year, which established his fame as a physicist. 1909 brought the first of a series of increasingly distinguished university appointments as his reputation continued to grow. Newspaper reports in 1919 of the experimental confirmation of his theory of relativity marked the beginning of his worldwide popular fame. That fame has lasted until today not only among the well-educated but also within the popular imagination, and his name has entered the English language as a symbol of visionary genius.

Because of Einstein's increasing celebrity and his reputation as a genius, hundreds of individuals, organizations, and causes sought his support. Einstein responded generously but selectively, supporting only those causes he believed in. Overtime he continued to rethink the relevant issues and to monitor each organization to make sure it deserved his continuing support. The major causes to which he lent his name, his efforts, and his words included international scientific and political cooperation, pacifism, international government, armed opposition to Germany’s military aggression, international disarmament , resistance to anti-Semitism and bias against other minorities, civil liberties, relief for the poor and for refugees, Zionism, and education, especially higher education for Jews. Late in his life, as an American, he spoke out for the young civil rights movement and against McCarthyism.

This exhibit highlights Einstein's multifaceted relationship with the 1st and at that point the only American Jewish college for undergraduates, Yeshiva College. The relationship began in 1933, the year Nazi actions against Einstein another German Jews led him to decide never to return to Germany. In spite of occasional friction, it remained strong until the death in 1940 of Dr. Bernard Revel, the 1st president of Yeshiva College. The second president, Dr. Samuel Belkin, renewed the relationship in the early 1950’s, and Einstein agreed in 1953 for the first and only time in his life to lend his name to an institution of higher education: Albert Einstein College of Medicine, the medical school of Yeshiva University. Arguably, among the three universities under Jewish Auspices established in America and Israel before his death, Yeshiva University enjoyed the most enduringly amicable relationship with Einstein.

By bringing to light many previously overlooked and unknown sources, this exhibit makes a contribution to four larger narratives within the life of Einstein, the world famous scientist and humanitarian whom Time magazine named on December 31, 1999 as its one and only “Person of the [Twentieth] Century”:

Drawing on paper
Credit: Office of the President, Yeshiva University,
Collection of the Yeshiva University Museum
This original 1942 portrait by Morris J. Kallem (1889-1953), a portrait painter who lived in New York and Pennsylvania, normally hangs in the office of the President of Yeshiva University.  So many artists drew Einstein during the decades of his celebrity that he sometimes joked, “I am a model.”  In one case he refused permission, then the artist drew him anyway.  In response, he good-naturedly wrote four lines of comical poetry on the drawing and added his signature.

Photo
Credit: ullstein bild Berlin – KPA; http://www.ullsteinbild.com
Having renounced his German citizenship in 1896, and having been a man without a country for five years, Einstein became a Swiss citizen in 1901.  In 1905, the year he published four crucial articles in Annalen der Physik as well as his doctoral thesis, he was laboring in obscurity as a patent clerk in Bern, Switzerland.  Not until 1909 did he take up a full-time, salaried academic position in the University of Zurich. 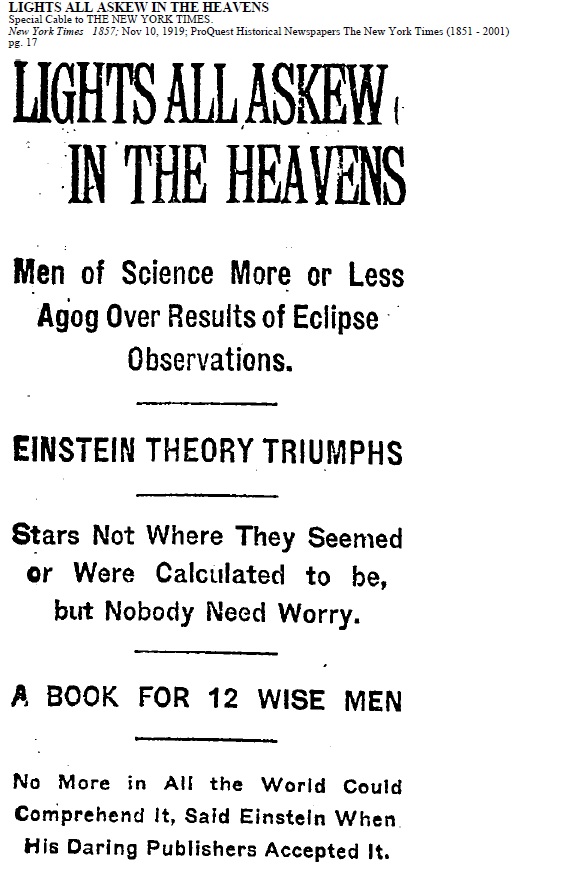 Newspaper article
Credit: New York Times November 10, 1919
In 1919 Einstein, already well-known among physicists, achieved worldwide popular fame.  His theory of relativity had enabled him to predict the precise degree of deflection by the sun of light from distant stars during a solar eclipse on May 29; photographs from two British expeditions had provided experimental proof; and on November 6, scientists reported the results to an extraordinary joint meeting in London of the Royal Society and the Royal Astronomical Society.  Experts in Newton’s homeland having acknowledged the overthrow of Newton’s system, the London Times broke the story on November 7, 1919, followed by the New York Times on November 10.  From that point forward Einstein represented the replacement of classical Newtonian physics by modern, relative, interrelated concepts of time, space, energy, and mass.

Photo of cover of illustrated newspaper
Credit: ullstein bild Berlin; http://www.ullsteinbild.com
Einstein awoke in November of 1919 to find himself famous.  This image appeared on December 14, 1919 as the cover page of the Berliner Illustrirte Zeitung [Berlin Illustrated Times].  Here is a translation of the caption:  “A new great in the history of the world:  Albert Einstein, whose investigations necessitate a total revision of our views of nature and equal in value the insights of a Copernicus, a Kepler, or a Newton.”

Photo
Credit: Yeshiva University
On October 8, 1934, the founding President of Yeshiva College, Dr. Bernard Revel (right) conferred an honorary degree upon Prof. Albert Einstein of the Institute for Advanced Study in Princeton (center).  Just one year after he moved to America and two years after its first graduating class, Einstein chose to express his personal support for a Jewish educational institution that combined religious studies with a liberal arts education.  Governor Herbert Lehman of New York (left) had received his own honorary degree on June 16 but returned in October to speak.

Photo
Credit: © Ruth Orkin
Einstein with Yeshiva’s second president, Rabbi Dr. Samuel Belkin, at a luncheon celebrating both the scientist’s 74th birthday and the naming of the Albert Einstein College of Medicine.  Well-known among his friends for his sometimes barbed wit and his sense of humor in general, Einstein loved to laugh.