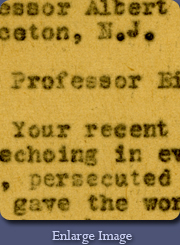 Einstein's statements and letters on behalf of Yeshiva College represent just one example of his selective yet wide-ranging advocacy of various causes during his years in America. Many of those chosen causes revolved around his universalistic humanitarianism, his internationalism, and his belief in democracy, all of which led him to oppose the rise of Hitler and the National Socialists in Germany as well as all of their anti-Semitic initiatives once they achieved power. Events in Germany caused him to strengthen his identification with the Jewish people, to advocate armed resistance because the threat to civilization had made pure pacifism temporarily impossible to maintain, and to work on half of Jewish refugees, especially professors and students fleeing to America, o Israel, and to other countries around the world.

March 15, 1939, Hitler invaded Czechoslovakia despite assurances made six months earlier in Munich that the Sudetenland would satisfy his hunger for territory. On March 21, in a major CBS radio broadcast, Einstein urged Jews and “all who believe in humanity and justice” to do everything possible to help the refugees. Since before he moved to America in October of 1933, Einstein had been helping individuals and groups find new homes outside Germany. But his current anxiety focused on an increasingly overwhelming flood refugees, numbering in the hundreds of thousands by 1939. His main call in the broadcast as to his fellow Jews to support “the Joint Distribution Committee and the United Palestine Appeal(,) ...the foremost American agencies providing for rescuing Jews from distress and need in Central and Eastern Europe." He stressed not only the needs of the refugees but also the contributions they could make to "economic and cultural” efforts in their new homes. As the address makes clear, Einstein's belief in Zionism and the need for Jewish settlement in Palestine was only growing stronger.

Revel heard and was moved by Einstein's appeal, which included two major themes he himself had been developing in his Commencement addresses and other major speeches since 1933: the moral, spiritual, and Biblical roots of the Jewish people and the threat posed by Germany to both Jewish and civilized values. Also, Einstein's speech overlapped with Yeshiva College's own efforts on half of refugees, especially students from European yeshivas. On March 23, Bevel wrote to praise Einstein for his talk and to ask him for a statement of support in connection with an April 2 dinner to raise money for student refugees at Yeshiva College. On March 30, Einstein provided a statement in which he emphasized the inner strength of students imbued with the Jewish tradition during times of "outward oppression” such as the present. This statement is reminiscent of his original 1933 letter to Gottesman in that he emphasizes the religious rather than the secular dimension of Yeshiva College.

Newspaper article
Credit: ©1939 by The New York Times Co.  Reprinted with permission.
On March 22, 1939, the New York Times printed this article with the full text of Einstein’s CBS radio address during the evening of March 21, 1939, just six days after Hitler invaded Czechoslovakia beyond the Sudetenland.  Before television, prime time radio represented the most effective way to communicate with a large audience.  Given the importance of the occasion and the intensity of the need, Einstein overcame his reluctance and spoke out publicly and forcefully.

Typescript letter:  Revel’s copy
Credit: Yeshiva University
Bernard Revel expressed his admiration for Einstein’s radio address in this letter.  He also asked Einstein to send a statement of support, as in the past, to a dinner being held on April 2 at the Hotel Astor to raise scholarship money for Jewish student refugees.  On March 30, Einstein provided a new statement tailored to the occasion:  “I take the liberty to send to the Yeshiva Dinner my hearty greetings and best wishes.  It is my conviction that Yeshiva College fulfills an important mission for it offers to our youth a many-sided and thorough training and simultaneously offers an atmosphere saturated with the spirit of Jewish tradition.  That it is of particular importance in our days needs no elaboration; for only those imbued with the value of our heritage will grow inwardly under the present outward oppression.”

Movie Moguls Do Their Part

Program for dinner
Credit: Yeshiva University
This is the program and journal for the “Scholarship Fund Dinner for Refugee Students at Yeshiva College” held on April 2, 1939, at the Hotel Astor.  Earlier fundraising efforts among movie moguls in California had achieved relatively minor successes.  This time, entertainment industry leaders from New York and elsewhere in America joined forces to sponsor the dinner. 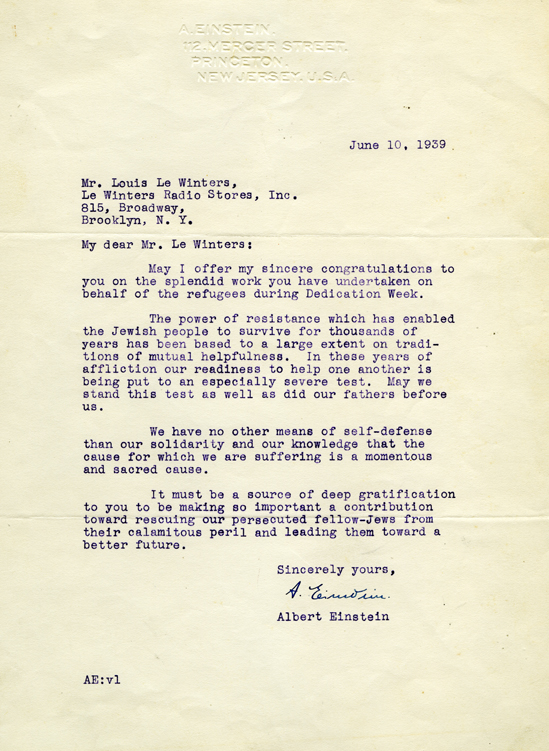 He Thanks a Fellow Volunteer

Letter
Credits: Yeshiva University; © The Hebrew University of Jerusalem
In this letter from Einstein to the head of Le Winters Radio Stores, Einstein congratulates Louis Le Winters for his “splendid work . . . on behalf of the refugees.”  Normally, Einstein solicited support for Yeshiva College, but here he expresses his appreciation for a particular volunteer’s support.