chat loading...
Skip to Main Content
YU Libraries are open to current YU students, faculty, staff members, and alumni/ae. Alumni/ae must first register with and present proof that they are fully vaccinated to the Office of Alumni Affairs. 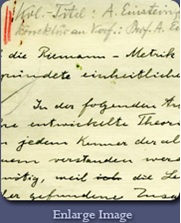 1905: Einstein's "Annus Mirabilis" (miraculous year): While working as a clerk in the patent office in Bern, Switzerland, Einstein composed five papers that revolutionized 20th century physics. His paper on the light quantum opened the door to quantum mechanics. Two papers on the atomistic hypothesis considered Brownian motion and helped establish once and for all the reality of atoms. Two papers on the theory of special relativity rendered our notions of time relative and posited the interrelationship of energy and mass.

The birth of quantum statistics: Einstein struggled all his life against the probabilistic interpretation of quantum mechanics: hence his assertion that "God is not playing dice with the universe." Yet he himself made fundamental contributions to quantum mechanics through his use of statistical physics. Those contributions began with his 1906 study of the specific heat of solids and extended through his 1925 prediction of the Bose-Einstein condensation, verified experimentally in the 1990s.

"The happiest thought of my life": Einstein later described with these words his realization in 1907 of the equivalence between accelerated systems and systems within a gravitational field, a breakthrough which enabled him to incorporate gravity within his general theory of relativity. Between 1913 and 1917 he folded into the theory a Riemannian geometry of curved surfaces. Although classical physics predicted the precession of the elliptical orbits of planets around the sun, it could not explain the exact degree of that precession. In 1916, when Einstein included the relativistic contribution within his latest calculations of the precession of the planet Mercury's orbit, he found to his utter delight that his results agreed perfectly with astronomical observations. In 1919, two British expeditions measuring data from an eclipse of the sun proved that Einstein had successfully and precisely predicted a second phenomenon which classical mechanics could not explain: the deflection of light in the presence of a gravitational body. Newspapers reporting that Einstein had overthrown Newton's concepts of space and gravity soon made him a worldwide celebrity.

The quest for a "unified field theory": The last thirty years of his scientific life Einstein dedicated to his relentless search for the unification of general relativity and quantum mechanics, still an unsolved problem today. Alternately optimistic and frustrated, he once quipped in response to a query, "Don't worry about your difficulties in mathematics. I can assure you mine are still greater." 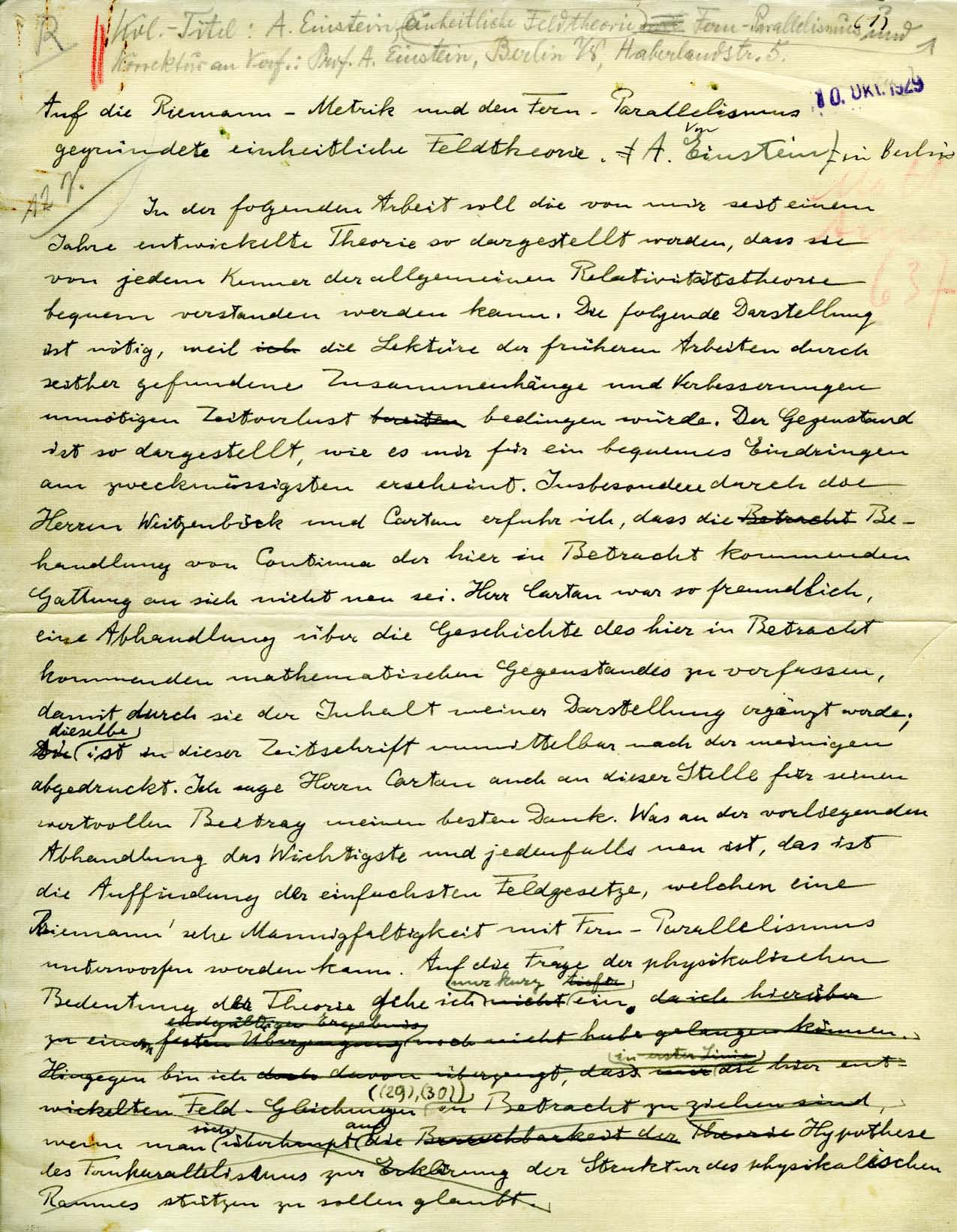 Credits: Yeshiva University; © The Hebrew University of Jerusalem
Einstein rarely submitted articles to journals of mathematics, but he chose to publish this particular manuscript in Mathematische Annalen.  Einstein’s revisions in the form of crossouts, insertions, and substitutions reflect his characteristic meticulousness in expressing his ideas.  The article, dated August 19, 1929 in pencil on the last page, presents one of the several unified field theories that he proposed between 1922 and 1953.
Dr. Leo Perlman presented the manuscript to Yeshiva University in 1958..  In explaining his motivation Perlman identified “Einstein the Jew” both with “the oppressed and persecuted” refugees who found “peace and security in this Land of Freedom” and with “the restoration and rebuilding of the Jewish Homeland in Israel.”  He saw it as “more than natural” that the manuscript should find its way into the “possession of an institution of learning which was so close to [Einstein’s] heart and feelings.”

Journal article
In 1930 the printed form of the 1929 manuscript was published in Mathematische Annalen, a famous journal then edited by David Hilbert and still being published today.  Here is an English translation of Einstein’s title:  “On the Riemann Metric and Distant Parallelism as the Basis of a Unified Field Theory.”

Paperback book
Credit: Dover Publications
In 1827, the English botanist Robert Brown discovered under the microscope the random motion of pollen grains and of other minute particles suspended in water, but he could not explain what came to be called “Brownian motion.”  Two seminal 1905 papers by Einstein posited that the random and uneven bombardment of sufficiently small particles by the molecules of the fluid would cause the particles to move in the zigzagging way described by Brown. These papers, together with subsequent experimental work by Jean Perrin, established the reality of atoms and molecules.  The book features Einstein’s original papers, yet Dover Books, one of the best-known producers of inexpensive classic texts in English, chose to publish it.  This odd combination of specialized journal articles with mass market publishing testifies to Einstein’s fame and continuing influence.

Photo of detail of manuscript
Credit: ullstein bild - AKG Pressebild; http://www.ullsteinbild.com
In the second half of 1905 Einstein devoted himself to the puzzle of the apparent incompatibility between the well-established laws of mechanics, in particular the Galilean law of addition of velocities, and one of the gems of 19th century physics, Maxwell’s theory of electromagnetism, which required the constancy of the speed of light.  Einstein came up with a radical solution that preserved electromagnetism and reconceptualized how time, space and velocity should all undergo transformations in mechanics. In doing so, he proposed a relationship between the energy and the inertial mass of a body.  For a body at rest, the famous equation E = mc2 expresses that relationship.  This photograph shows the complete version of the equation, which applies to moving objects as well, as it appears in a manuscript of 1912.