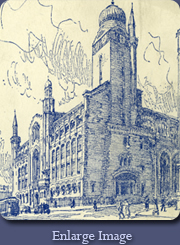 Einstein interacted with numerous representatives of Yeshiva College during 1933 and 1934: Mendel Gottesman, Herman Bernstein, and Jekuthiel Ginsburg among them. But he formed his most important and longest-lasting bond with its founding president, Dr. Bernard Revel. Both believed in contemporary higher education for Jews, both wrote German fluently, and both were Zionists, each in his own way. Both were horrified by the anti-Semitic laws and actions unfolding in Germany. In addition, Revel sincerely admired Einstein. In a letter to his in-laws in Oklahoma dated September 28,1934, inviting them to the honorary degree ceremony on October 8, he wrote,"Dr.Einstein symbolizes, to all thoughtful men, the spirit of free and unfettered research (and) the spirit of sacrifice for truth and justice.”

Obviously, the two did not share the same religious and educational outlook. Revel believed in God as revealed in the Torah and in written and oral laws as understood by the rabbis over thousands of years. Einstein believed in the spiritual aspirations and the moral teachings of the Jews, and in the unity and harmony of the universe. Revel believed in a combination of yeshiva and college, but he considered religious education basic and central. Einstein believed in Jewish learning for the sake of its ethical and spiritual dimensions, but he highly valued modern secular education in the liberal arts, particularly science.

Beyond his personal admiration for Einstein, Revel hoped to win Einstein's active help in persuading donors to support the College he had recently founded. The original campaign for Yeshiva College had been launched in 1923, the land bought in 1924, the cornerstone laid in 1927, and the first class held on September 25,1928. The first full class of students graduated on June 16,1932. Because of the Depression, many donors were not able to honor their financial edges. As a result, only one of the buildings originally planned could be completed. For months on end the College could not pay faculty their salaries or meet its other financial obligations, and Revel was not always sure the Yeshiva would survive. It was therefore virtually inevitable that Revel would try to enlist Einstein's aid in raising the funds desperately needed to keep both yeshiva and college afloat. Indeed, Einstein's intermittent help proved a godsend.

From 1935 through 1940 Einstein remained quite willing to support the College writing directly to prospective donors whose names Dr. Revel and other college representatives sent him, though he occasionally complained about the potential ineffectiveness of his efforts. For instance, he once worried that too many letters would lead to diminishing returns, and he once claimed that a personal meeting would be better than a letter because he could speak frankly bout prejudice against Jewish students in other American colleges. Most of the donors lived on the East Coast, but Einstein also reached out to motion picture industry leaders in Hollywood and to friends of Dr. Revel's prosperous in-laws in Texas and Oklahoma. He refused to come to dinners, ceremonies, and benefits in person, not even to a dinner to raise money for Jewish refugee students who had found a new home at Yeshiva College. But he did send numerous public statements on behalf of the College to major fundraising events. Overall, he proved remarkably cooperative, and the evidence shows that many of his efforts over the years did in fact bear fruit. Unfortunately, Dr. Bernard Revel died Prematurely on December 2, 1940, bringing an end to their joint efforts.

Cover of dinner journal
Credit: Yeshiva University
This program for the Jubilee Redemption Dinner of December 13, 1937, which features a rendering of the architectural centerpiece of the Wilf Campus, shows how Yeshiva College continued to rely on its relationship with Einstein for fundraising events despite his not being there in person.
The Redemption Dinner was one of the fundraising events celebrating the 50th anniversary of the 1886 founding of Yeshivat Etz Chaim, which merged in principle with Rabbi Isaac Elchanan Theological Seminary (RIETS) in 1912.  Rabbi Dr. Bernard Revel became the leader of these merged yeshivot.   In the 1920s Revel founded Yeshiva College. 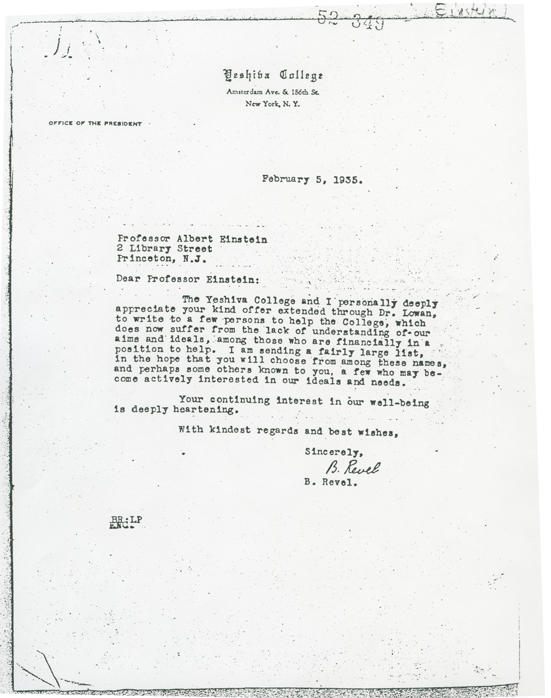 Copy of Revel’s letter
Credits: Albert Einstein Archives, Jewish National and University Library, Hebrew University of Jerusalem
This letter written to Einstein by Dr. Bernard Revel on February 5, 1935, implies that Dr. Arnold Lowan has served as an intermediary, possibly asking Einstein if he would be willing to write some letters on behalf of Yeshiva College but certainly conveying Einstein’s willingness to do so.  Though Einstein has offered to write to a few people, Revel sends him a long list.  Replying on February 19, Einstein objects that he cannot choose a few donors from the list both because he is a foreigner and because “in general, people here have no esteem for intellectual achievements, so that even the most intelligently grounded appeal remains ineffective.”  He asks to be put in touch with “a man who is both respected in [prosperous] circles and sufficiently interested.”  But in the end Einstein did write “extensively” to a shorter list of possible donors “conveyed” to him by Dr. Leo Jung. 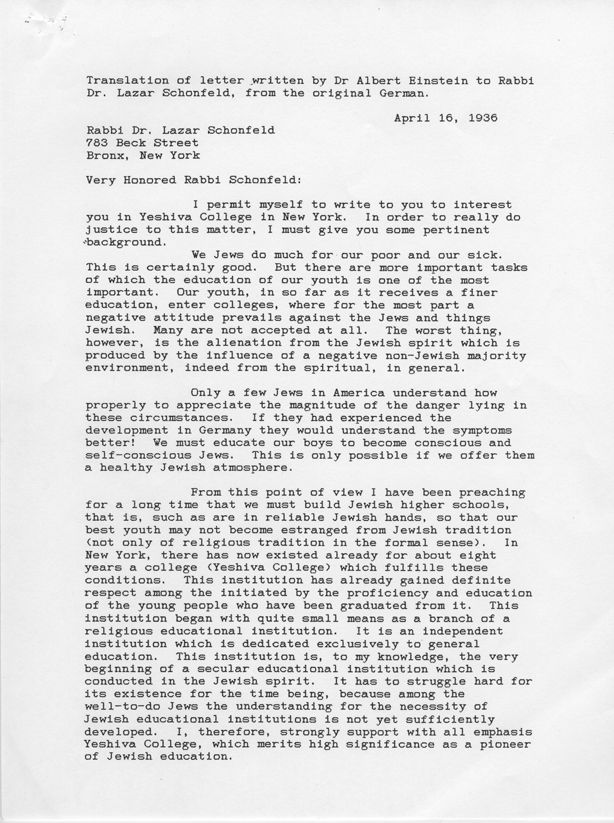 Einstein on Bias Against Jewish Students

English translation of German letter
Credits: Yeshiva University; © The Hebrew University of Jerusalem
Einstein wrote this fundraising letter to Rabbi Dr. Lazar Schonfeld on behalf of Yeshiva College and reported that he was also writing to Boris Morros, General Manager of Paramount Studios in Hollywood; B.P. Shulberg, a producer at Columbia Pictures who had previously been with Paramount; and two southwestern businessmen, Mr. Samuel Miller and Mr. Eugene Solow.  In this his frankest assessment of the need for a college under specifically Jewish auspices, he stresses over and over again the obstacles to higher education and to success which Jews face in America and faced in much worse form in Germany. 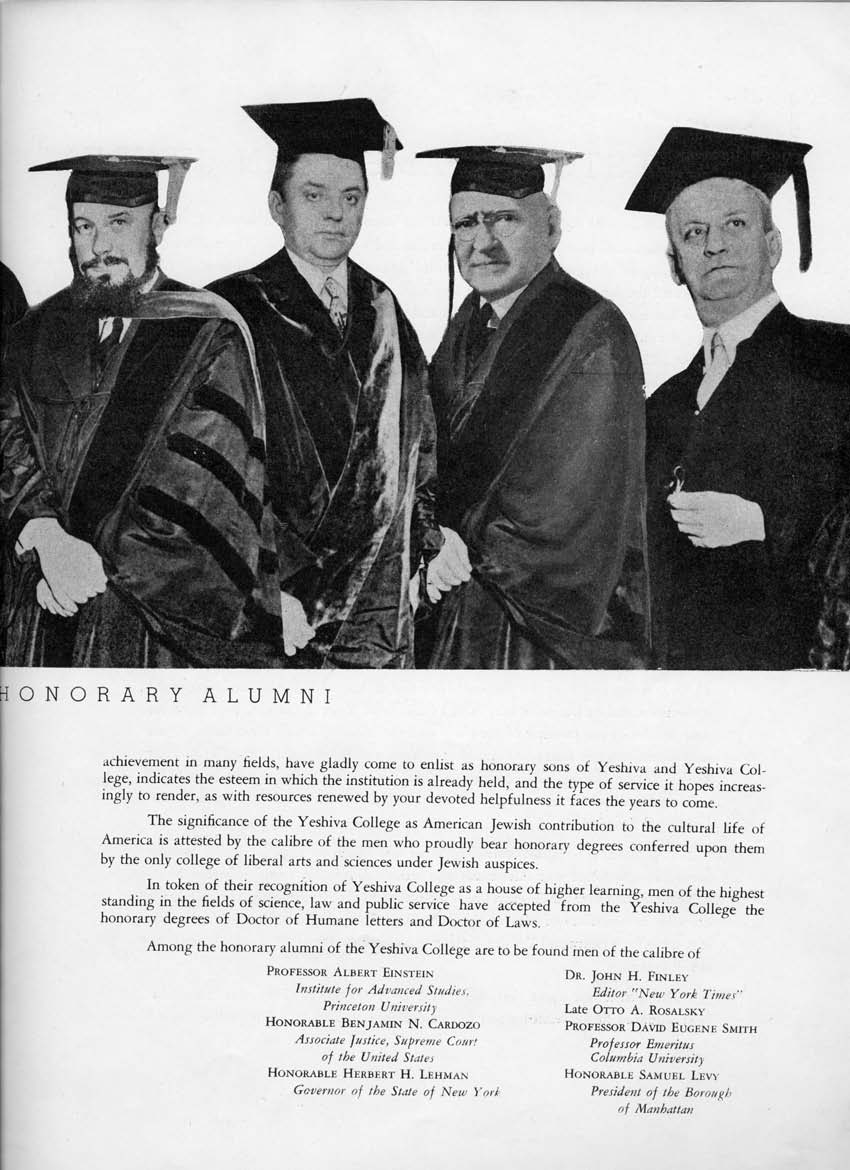 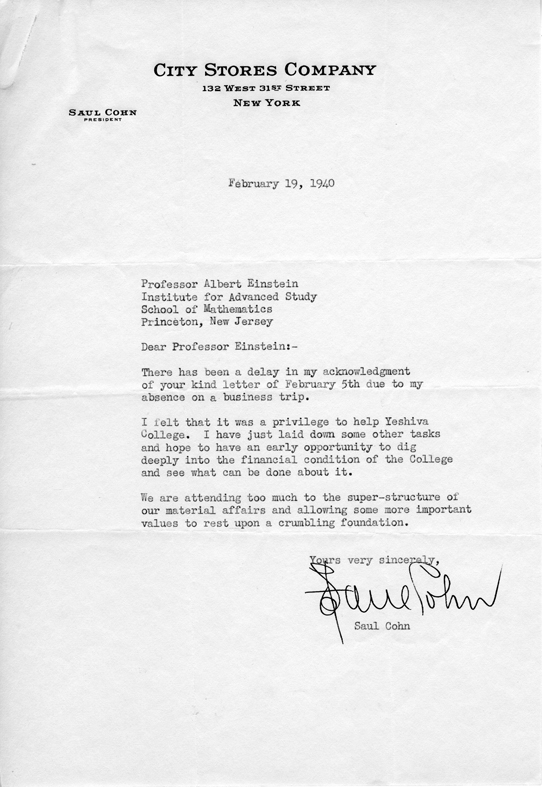 An Inspired Prospect Thanks Einstein

Letter
Credit: Yeshiva University
Einstein had written on behalf of the College to Barney Balaban, President of Paramount Pictures, as well as to Saul Cohn, the head of City Stores.  On March 14, Jacob Hartstein sent word to Helen Dukas, Einstein’s secretary, that Cohn had indeed “entered actively on an important aspect of the College’s financial situation.”  Some of Einstein’s efforts did bear fruit.