chat loading...
Skip to Main Content
YU Libraries are open to current YU students, faculty, staff members, and alumni/ae. Alumni/ae must first register with and present proof that they are fully vaccinated to the Office of Alumni Affairs.

Einstein Sets Limits and Insists on a Question 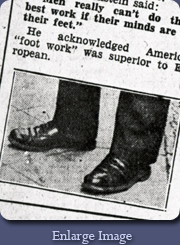 Not only did Einstein carefully select the causes he was willing to support and the ways in which he was willing to express his support, but he also monitored the beneficiaries of his generosity. In the case of Yeshiva College, he distinguished between "commercial” fundraising which he adamantly opposed, and legitimate fundraising on behalf of the only undergraduate college in North America under Jewish auspices.

Especially in America, Einstein was constantly invited to endorse commercial products, and he invariably refused. In 1936 Salomon Flink, a professor of economics at Yeshiva College, sent him a batch of fundraising letters, and on November 5, in a letter to Revel, Einstein flatly refused to put his name to them. The problem cannot have been the raising of money or a worthy cause, for Einstein had been doing that since his first visit to America in 1921. In fact, Einstein had sometimes 'sold' his autograph or an autographed picture to raise money for charity. Nor can the problem have been the solicitation of funds from prosperous businessmen, for Einstein signed numerous letters of that kind on behalf of Yeshiva College. When asked during his visit to Palestine in 1923 whether he had any sage advice for the Zionists, he replied, “Collect more money.” Perhaps the letters offered some sort of quid pro quo such as the use of Einstein's name for business purposes.

A more serious potential setback in 1937 led to a friendly yet testy exchange tween Einstein and Revel. Sometime before March 2, having heard that faculty were chosen in part for religious reasons and that some students had been expelled for failing to observe specific religious practices, Einstein shared his objections with Prof. Leo Zippin, an instructor of mathematics at the College. Einstein wanted the most qualified faculty to be hired and the brightest students to succeed; he felt that no one should be deprived of the opportunity to teach or earn for religious reasons. In a letter dated March 12, Revel first asks for Einstein's help in convincing “Mr. Warner” and a group of his friends to support Yeshiva College, then responds vigorously to Einstein's potentially damaging assertions. The list of expelled students Revel sent to Einstein apparently does not survive, but analogous lists exclusively cite inferior academic performance as the reason or expulsion. According to one document, sanctions for not attending prayer services included contacting parents and withdrawing the privilege of staying in the dormitory, not expulsion. Overall, the interchange demonstrates Einstein's priority: the contemporary education of individual Jews. It also demonstrates the persistence of the relationship between Revel and Einstein despite the potential setback.

The importance of their relationship became apparent when Bernard Revel died on December 2, 1940, severing the main linked between Einstein and Yeshiva College. Revel's successor Samuel Belkin did inform Einstein in 1945 of the expansion of the College into a university, but it was not until the early 1950s, in connection with a new medical school, that Belkin and Einstein worked together to add one last, crucial chapter to the story of "Einstein and Yeshiva University."

Photo of newspaper advertisement
Credit: Reproduced with permission of the Forward Association, Inc.
This advertisement from the Forward on March 5, 1931 shows that Einstein had good reason to worry about the use and abuse of his name.  Companies constantly asked him for endorsements and offered money in return, but some simply appropriated his name for commercial purposes.  This example is less egregious than some in that it recycles a legitimate if rather trivial newspaper article on Einstein’s opinion of American shoes entitled "Even Dr. Einstein's Feet Grow Larger in Sunny California" (New York American, Tuesday, March 3, 1931).   Popular journalists loved to hear from Einstein on topics having to do with everyday life.  The advertisement can’t have hurt; Coward Shoes are still being made. 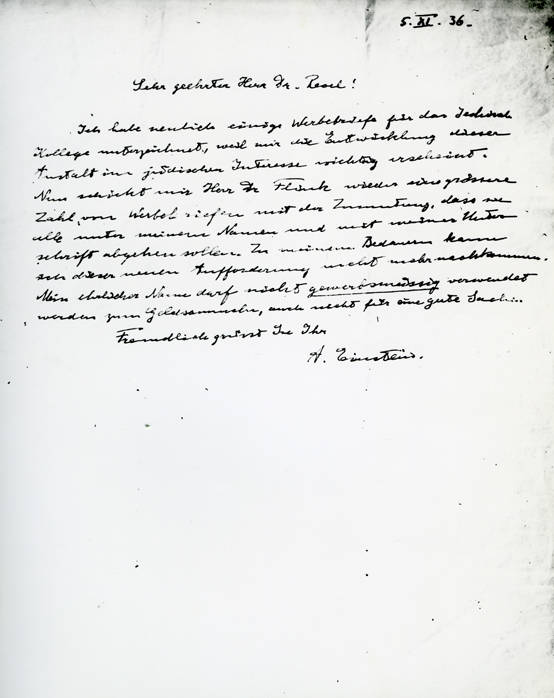 English translation and photo of German manuscript letter
Credits: Yeshiva University; © The Hebrew University of Jerusalem
In this handwritten letter dated November 5, 1936, Einstein writes Revel refusing to sign a batch of letters forwarded to him by Prof. Salomon Flink, an economics professor who received his Ph.D. from Columbia in 1930 and taught at Yeshiva College in the 1930s (and later at Rutgers, where a common saying among some students was “Flunk with Flink,” but others highly valued his teaching).  It is clear that for Einstein, the letters went over the line between legitimate fundraising for a worthy cause and “commercial” exploitation of his name. 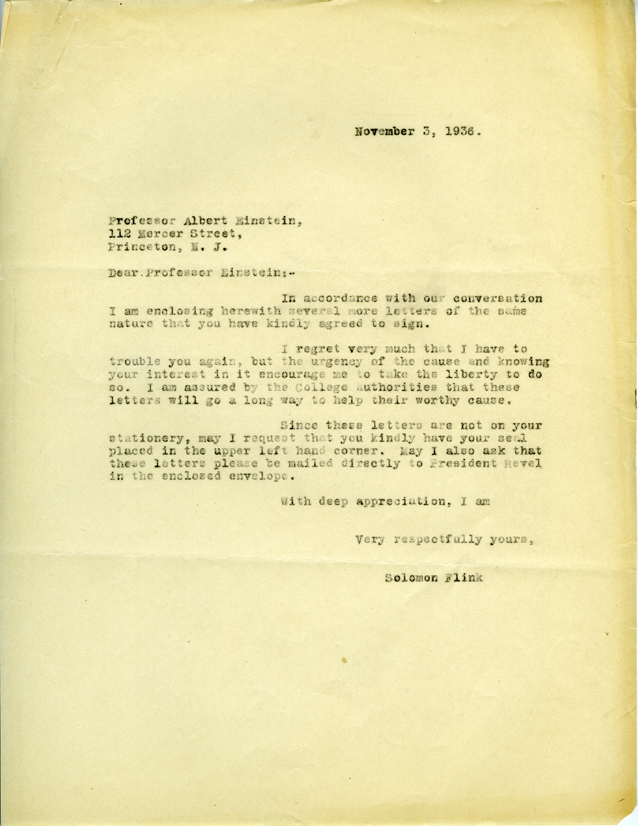 Asking for Too Much

Carbon copy of letter
Credit: Yeshiva University
Prof. Flink’s letter to Einstein two days earlier, on November 3, addresses the issue of Einstein’s seal as a warrant of genuineness.  Einstein may have been put off in part by being contacted by someone he didn’t know claiming vaguely that the “higher authorities” of the College had approved of the letters.  But Einstein wrote his letter of refusal to Revel, not Flink, making it clear that he held Revel responsible. 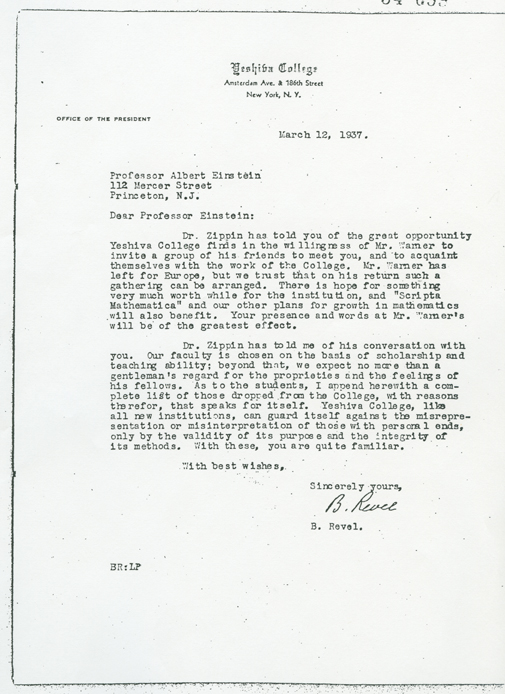 Revel Defends the Integrity of the College

Copy of Revel’s letter
Credits: Albert Einstein Archives, Jewish National and University Library, Hebrew University of Jerusalem
In this letter of March 12, 1937, Revel writes Einstein for two purposes:  to ask for his help and to defend the academic integrity of Yeshiva College.  Since Yeshiva University repeatedly asked heads of studios for donations in the 1930s, Mr. Warner may well have been one of the Warner Brothers, one of whom identified with traditional Judaism. 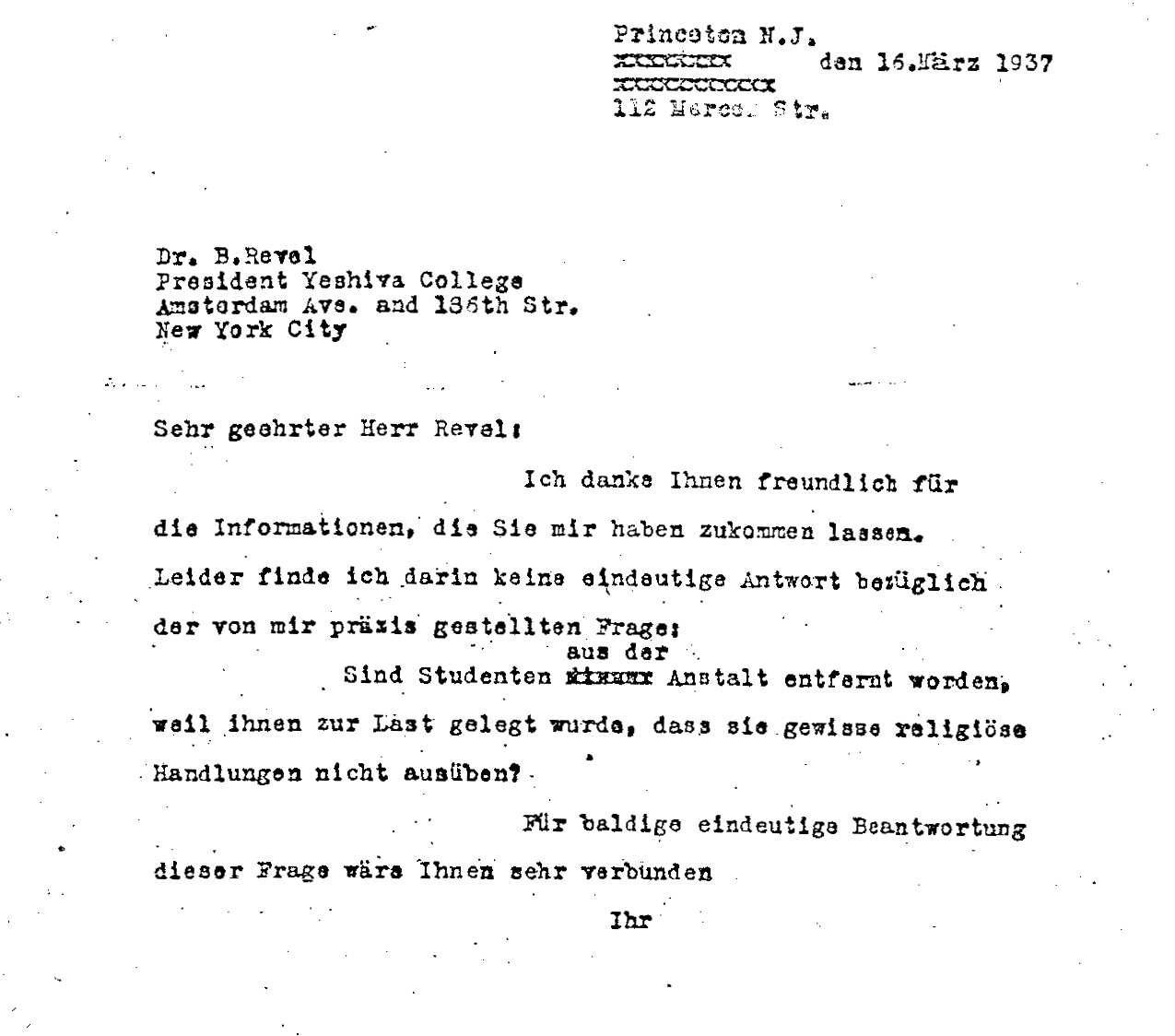 A Friendly Yet Testy Exchange.