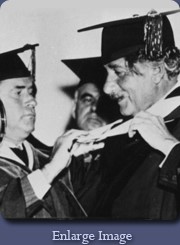 The honorary degree which Yeshiva College bestowed upon Einstein in 1934 marked a critical point in the unfolding of the relationship between the famous scientist and the College. Though he disliked ceremonies of all kinds, Einstein agreed not only to come to this one, but to deliver a short address in person. Thus Yeshiva College joined a selective and distinguished list of institutions from which Einstein agreed to receive honorary degrees: in Europe Geneva, Zurich, Rostock, Madrid, Brussels, Oxford, Cambridge, Leeds, Manchester, Glasgow, and the Sorbonne; and in the Americas, Buenos Aires, Princeton, Harvard, New York State University at Albany, Swarthmore, Lincoln, and Yeshiva. Among those institutions, Yeshiva was by far the most recently established, and it was the only one sponsored by Jewish people.

It is instructive to compare Einstein's involvement with Yeshiva College to his relationships with two other Jewish institutions, Hebrew University and Brandeis university. In 1921, during his first visit to the United States, he joined Chaim Weizmann for a fundraising tour on behalf of Zionism in general and the establishment of Hebrew University in particular. On February 7,1923, in Palestine, he delivered the inaugural address for that University, symbolically beginning his speech in Hebrew before continuing in French. In 1925 he was elected to the Board of Governors and chaired its first meeting, but tension over highhanded, questionable academic decisions by Chancellor Judah Magnes eventually caused him to resign from the Board in 1928. He never returned despite repeated invitations by Weizmann, but after some reforms were instituted, he once again supported the institution, and late in his life he specified Hebrew University as the beneficiary of his collected papers.

In the spring of 1933, after anti-Semitic laws and policies led to the resignation and ouster of hundreds of German Jewish academics, Einstein conceived of a refugee Jewish university, "best placed in England," which would enable his colleagues to carry on their intellectual work. But this idea never came close to fruition. Instead, existing institutions and newly formed academic assistance societies helped the refugee scholars.

In 1946 Einstein began to chair the advisory committee of the Albert Einstein Foundation for Higher Learning, which sought to establish a secular university under Jewish auspices in Waltham, Massachusetts. The founders of the institution wanted to give it Einstein's name. He declined, then strongly supported naming the new university after their second choice, Louis D. Brandeis. But when Rabbi Israel Goldstein, the head of the Foundation, did not consult the advisory committee about who would become the president of the new institution, Einstein submitted a letter of resignation. After being temporarily coaxed back, he submitted his second and final letter of resignation in late 1947.

Disagreement over the decisions made by the earliest leaders of Hebrew and Brandeis Universities led Einstein to sever his ties with each. Seen in that context, Einstein's relationship with Yeshiva College, despite occasional friction, proved not only long-lasting but remarkably supportive and respectful.

Photo
Credit: Yeshiva University
This photograph from October 8, 1934, shows the actual conferring of the Doctorate of Humane Letters, honoris causa, upon Einstein.  The hood symbolizing the degree has just been placed over Einstein’s head, and Revel (just left of the lectern, which displays the Star of David) is about to hand him his diploma. 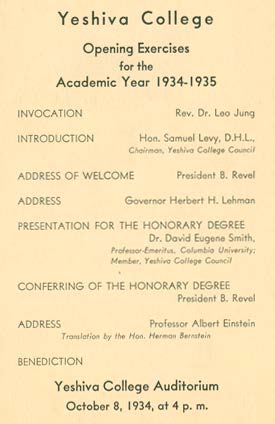 Modest and Simple, As Einstein Requested

Program
Credit: Yeshiva University
The program for the Opening Exercises on October 8. Governor Lehman had received an honorary degree at the Commencement Exercises the previous June 16 but returned to speak and to participate in the festivities for Einstein. 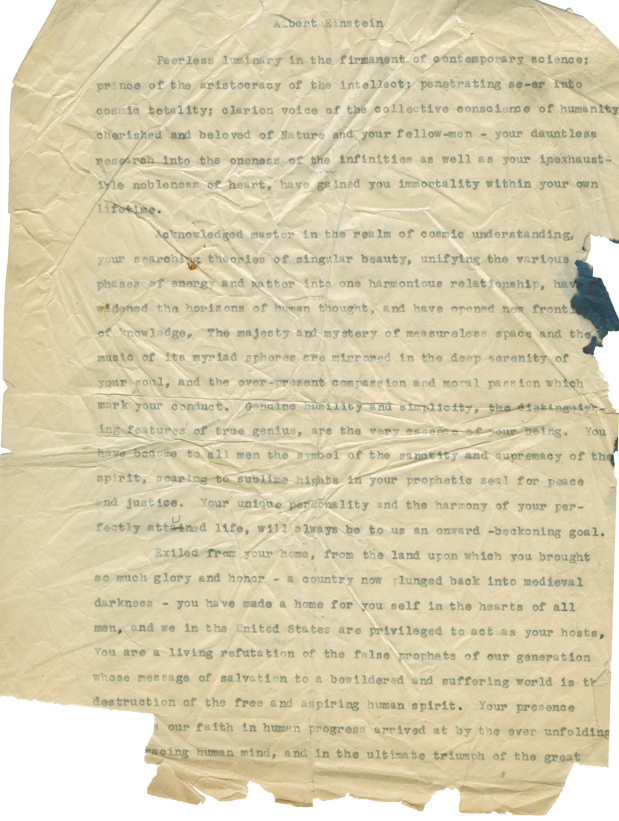 Revel’s Typescript
Credit: Yeshiva University
Adhering to a time-honored academic tradition, Revel praised each and every recipient of an honorary degree before conferring it.  Here Revel’s words make obvious his admiration for, even adulation of, Einstein as visionary physicist, passionate humanitarian, and fellow Jew.  Einstein apparently said to Revel afterward, “You have described me as you wish me to be, not as I am.” 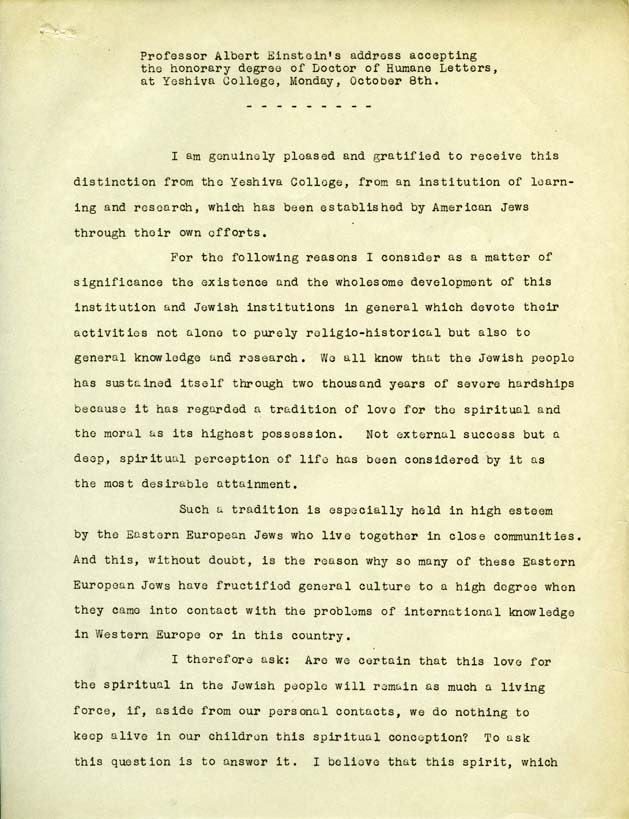 “Love for the Spiritual and the Moral”

Typescript of English translation
Credits: Yeshiva University; © The Hebrew University of Jerusalem
This is the English translation of Einstein’s address in German on October 8, 1934, read that day by well-known journalist Herman Bernstein.  Revel and other leaders within Yeshiva College clearly found Einstein’s words both heartening and useful.  They reused nearly the whole address within the journal for the Jubilee Redemption Dinner at the Hotel Astor on December 12, 1937.  They used it again within the program for a dinner raising funds for scholarships for refugee students held at the Hotel Astor on April 2, 1939.  Normally Revel, knowing Einstein would never agree to sit through a fundraising dinner for the College, asked him to send a statement of support instead.  In these two cases, as usual, Einstein obliged. 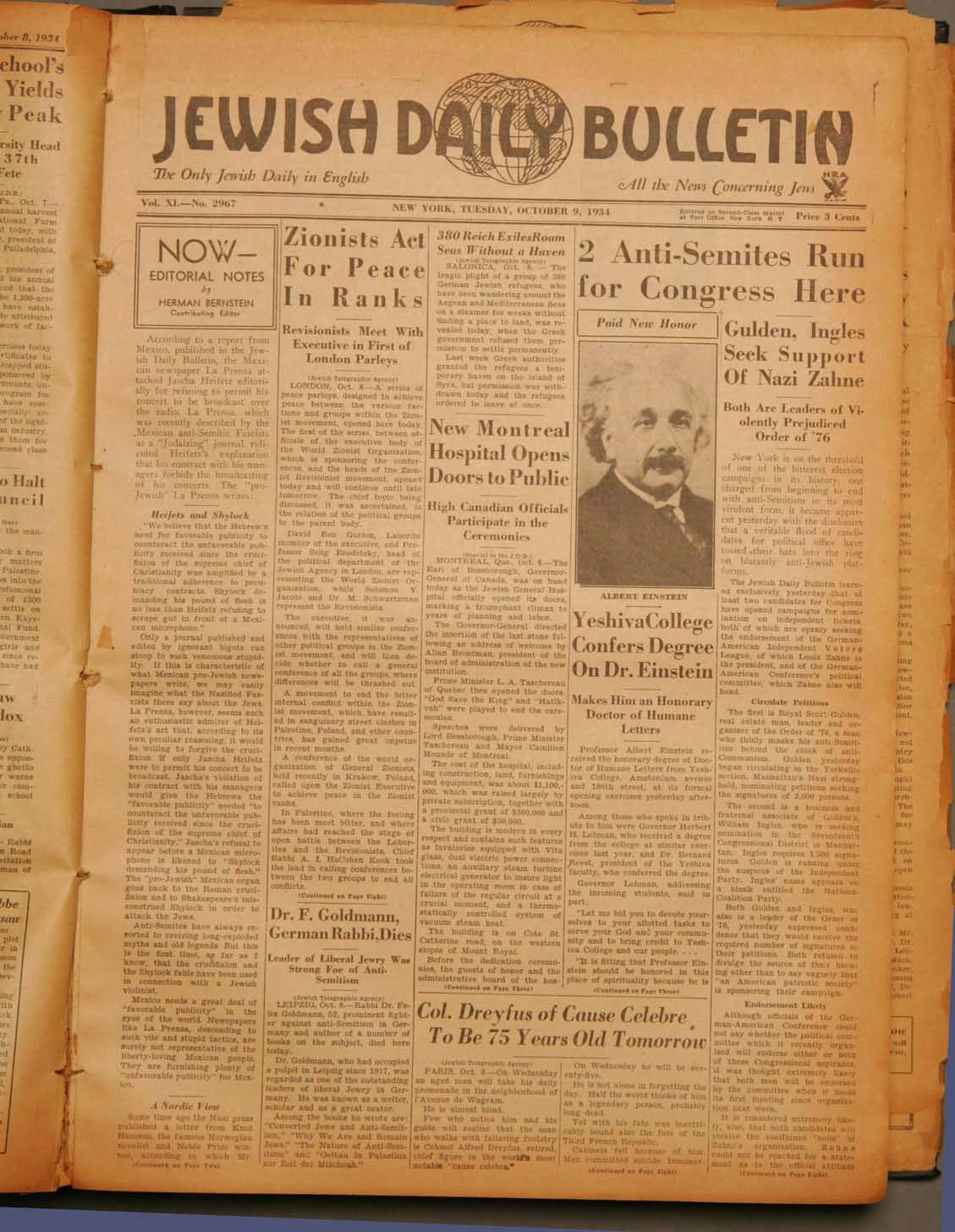 The Only Jewish Daily in English

Newspaper front page
Credit: Published by the Jewish Telegraphic Agency
This issue of the Jewish Daily Bulletin includes a front page story on the October 8 degree ceremony honoring Einstein.  Einstein thought highly enough of the newspaper to set type for them on one occasion, as a photograph they published proves.  Note Herman Bernstein’s regularly featured column “Now,” which Einstein read and enjoyed, on the lefthand side of the page.  In this particular column Bernstein attacks the Mexican newspaper La Prensa for a nastily anti-Semitic attack on Jascha Heifetz and publicizes a philo-Semitic action by Knut Hamsun even though newspapers in Germany have praised the Norwegian author for endorsing Nazi anti-Jewish policies.