In 1945, under the leadership of President Samuel Belkin, a change in charter officially transformed Yeshiva College into Yeshiva University. This change in status, along with a further change in 1950 allowing the University to offer medical and dental degrees, opened the door to the one and only institution of higher learning that bears Einstein's name the Albert Einstein College of Medicine.

Einstein's involvement in this last chapter of his relationship to the University developed in stages, just as the first had. On March 23, 1951, he wrote Dr. Belkin in support of Yeshiva University's recently announced plans for a new medical school. On July 15, 952, he was named Honorary Chairman of the Medical School Campaign. On March 15,1953, in honor of his 74th birthday on March 14,a ceremony in Princeton, the presentation of a modest architectural model, a rare public appearance, and an extraordinary press conference marked the official adoption of his name for the medical school. A year later, this time on March 14, the Presentation of a second, more elaborate architectural model marked the celebration of his 75th birthday. Unfortunately, he died on April 18,1955, so that he saw neither the official opening on September 12 nor the dedication on October 23.

In 1946, even though the organizing committee for what became Brandeis University bore Einstein's name, he refused to allow the new institution to call itself Einstein University. He preferred that Yeshiva University likewise choose another name for its new medical school ,and he specifically suggested Maimonides, the most famous Jewish physician of all time. But sometime in 1952, rather uncharacteristically given his normal unwillingness to be pushed into the limelight, he did agree to lend his name.

The question is why. Einstein's public statements in support of the Albert Einstein College of Medicine reveal the strength of feeling which motivated him to make this exception. He wanted the school to “welcome students of all races and creeds," but Jewish auspices would "make it possible for many of our young people in this country to study medicine.” As often, he used the word "our" to include himself among Jews, for he identified with the young Jews prevented from entering medical school by anti-Semitic quotas. We can only speculate as to other underlying causes for his decision. Certainly the earlier history of his relationship with Yeshiva College and Bernard Revel must have played a role. And his health was growing more precarious, so he may have welcomed an appropriate way of being remembered. But given his lifelong willingness to devote himself to a worthy cause, he probably accepted the argument that the use of his name would increase the chances that the new institution would flourish sooner rather than later. After all, the Albert Einstein College of Medicine as a new entry into a competitive national environment. Yet the chances for its success in 1955 were much greater than the chances during the Depression for the success of Yeshiva College. By the Spring of 1953, Honorary Chairpersons of the national campaign included "Eleanor Roosevelt, World's First Lady; Thomas E. Dewey, Governor, New York; Richard M. Nixon, Vice-President of U.S.; Vincent R. Impellitteri, Mayor, New York City; Eddie Cantor, Noted Radio-TV star; George Alpert, Leader, Brandeis University; George Meany, President of AFL; and Walter P. Reuther, President of C10" as well as the most famous of them all, Albert Einstein. 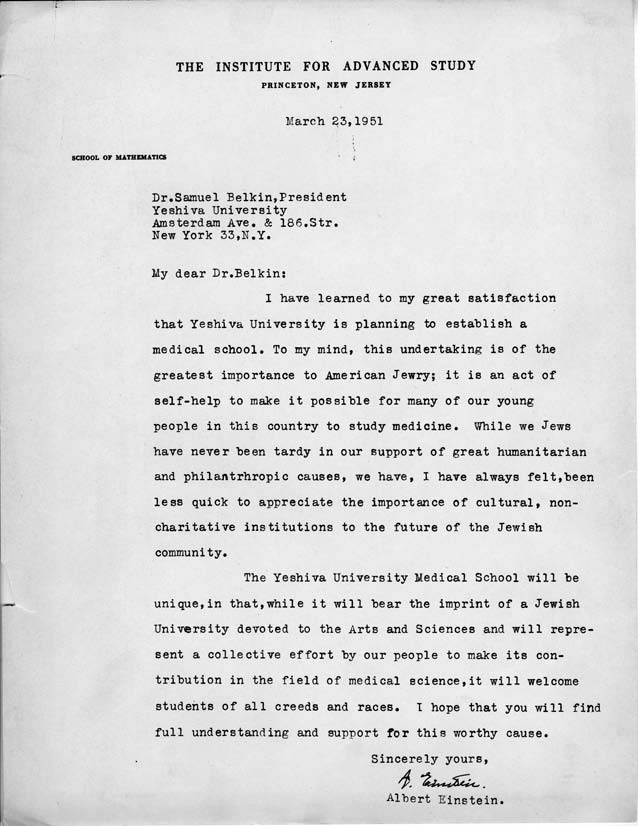 Newsletter
Credits: Yeshiva University; Photograph of Albert Einstein: Patrick Burns/The New York Times
This Spring 1953 AECOM Progress Report marks the halfway point in the $10 million campaign, which in turn formed part of the overall $25 million campaign.  It was issued shortly after the naming ceremony on March 15, 1953, during which the pictured architectural model was presented to Einstein.

Photo
Credit: As seen in the New York Times August 10, 1952
Around August 9, 1952, the following five Yeshiva College students, each of whom had “won National Science Foundation fellowships for post-graduate work in chemistry, physics, mathematics, and medicine,” visited Einstein in his office at the Institute for Advanced Study:  “Arthur Taub of Brooklyn, Kurt Eisemann of New York, Simon Auster of Highland Park, NJ, and William Frank and Seymour Aronson, both of Brooklyn.”  The caption appeared under the photograph in the New York Times. 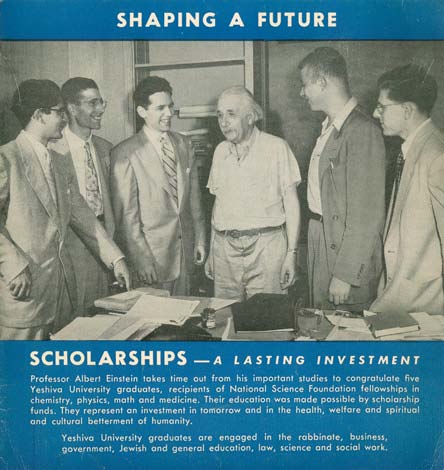 Brochure
This circa 1954 brochure praising scholarships as “a lasting investment” recycles the previous photograph, which features some of Yeshiva University’s most talented and high-achieving students. On the back of the brochure, appears a list of the current and future divisions of Yeshiva University. Note that the recently established STERN COLLEGE FOR WOMEN appears under “TODAY” while “A $25,000,000 MEDICAL-TEACHING CENTER INCLUDING THE ALBERT EINSTEIN COLLEGE OF MEDICINE” appears under “TOMORROW.”