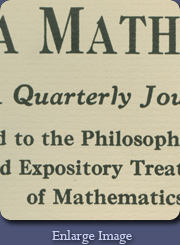 Scripta Mathematica: A Quarterly Journal Devoted to the Philosophy, History, and Expository Treatment of Mathematics plays an important role in the budding relationship between Einstein and Yeshiva College. Whereas Einstein had originally conceived of the College as a place of Jewish learning, he soon came to realize that it was also a full-fledged liberal arts college with one foot in the world of contemporary scholarship. “The only mathematical journal published under Jewish auspices," Scripta helped prove to him that Yeshiva College was not only a recipient and transmitter of traditional Jewish learning but a contributor to modern secular learning as well. Founded under the editorship of Dr. Jekuthiel Ginsburg, the journal produced its first issue in September 1932. By December 1933, when Revel intended to send all its issues to Einstein, five had been published. On September 23,1934, just weeks before the granting of the honorary degree to Einstein, Prof. Ginsburg invited him to become an Honorary Member and to join the Advisory Board of the Forum of Friends of Scripta Mathematica, a group which at that point included Revel, Bernstein, and Columbia Professors Cassius Jackson Keyser and David Eugene Smith. Einstein accepted.

By 1937, New York Times Editor-in-Chief John Finley and renowned American philosopher John Dewey had joined the Honorary Advisory Board of the journal, and Einstein had agreed to act as its Chairman. In that capacity Einstein wrote a letter in 1937 appealing to donors for support of the publication, which he referred to as "both Jewish and universal.” Articles written by contributors from round the world exhibited a broad range of subject matter, yet one special focus was historical and contemporary Jewish contributions to mathematics. The Journal therefore remains interesting for both its mathematical and its cultural substance.

Nearly twenty years later, in the early 1950s, Yeshiva University's second President Samuel Belkin reached out to Einstein in connection with the Albert Einstein College of Medicine. The journal was still being published, and Einstein renewed his relationship with Prof. Ginsburg, by that time head of the University's institute of Mathematics. 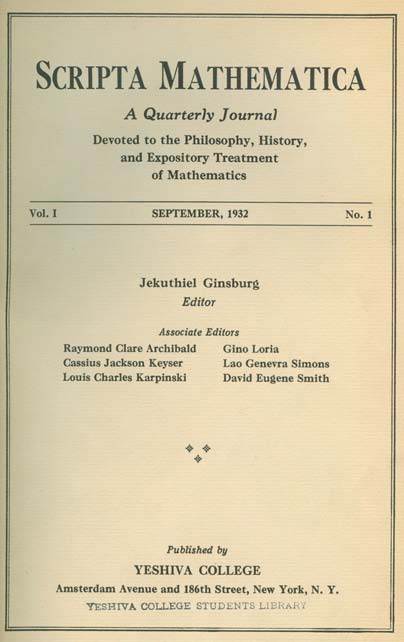 Young Einstein: What Did He Read?

Journal article
Credit: Yeshiva University
Einstein almost certainly saw in the first issue of Scripta Mathematica Max Talmey’s “Recollections of Einstein’s Boyhood and Youth” (pp. 68-71).  Originally named Max Talmud, he had been a weekly visitor at the Einsteins’ home from 1890 on.  He had introduced young Albert to a wide range of books, including the first works about physics and mathematics that Einstein studied on his own as well as the works of Kant — like Spinoza, one of Einstein’s favorite philosophers. 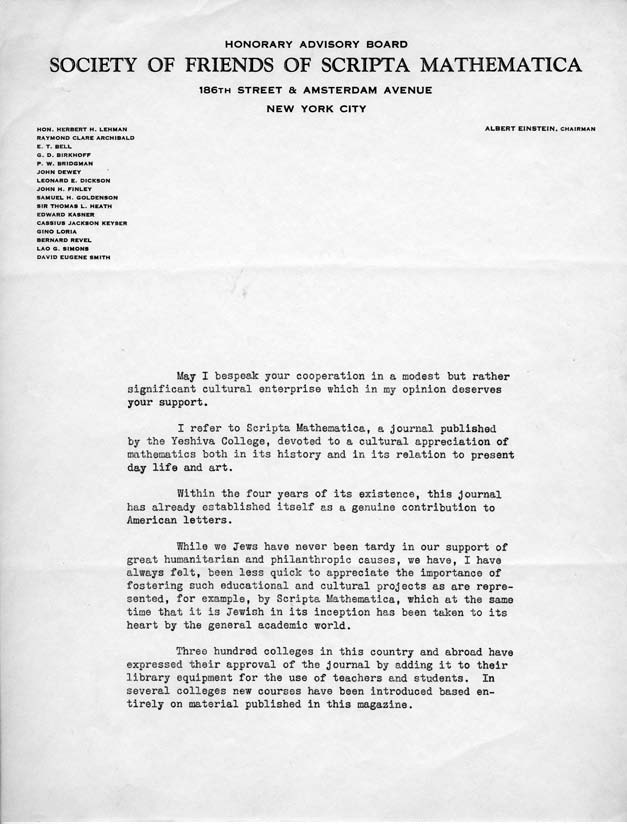 Typescript letter
Credits: Yeshiva University; © The Hebrew University of Jerusalem
On April 15, 1937, as chair of the Advisory Board for Scripta Mathematica, Einstein wrote this eloquent letter seeking financial support.  The letterhead appeals to donors partly by virtue of the prominence of Einstein and the other members of the Advisory Board, but the letter stresses what was important to Einstein about the journal:  its Jewish sponsorship, its inclusion of items of special interest to Jews, and its welcoming of materials from contributors of all races and creeds.

Photo
Credit: Yeshiva University
This circa 1953 photograph, taken close to twenty years after Einstein first learned about Scripta Mathematica, places Einstein between Yeshiva University President Samuel Belkin (left) and Professor Jekuthiel Ginsburg (right), by that time the head of the Yeshiva University Institute of Mathematics as well as editor of the journal.  The three are standing in Einstein’s office at the Institute for Advanced Study in Princeton.