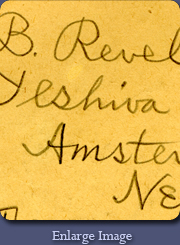 In October 1933 Einstein took up his position as one of the founding members of the Institute for Advanced Study in Princeton, which enables its faculty to devote all their time to research. He knew he would not be going back to Germany, but he did not know that Princeton and the Institute would serve as his home base for his remaining 22 years. Immediately he was besieged, even more than in Germany, by requests for speeches, statements of support, commercial endorsements, and answers to scientific and nonscientific questions. In this climate, though generous with his time and money, Einstein had to be extremely selective about the individuals and the causes he agreed to help. Yeshiva College, a fledgling facing the Depression, did not find it easy to earn his friendship. Fortunately, the institution and its representatives could legitimately appeal to him on many grounds: support for education in general, education in the sciences, education for Jews, and Zionism. Within a year, Einstein came to see he College as fostering both the spiritual and moral roots of Judaism and the secular, contemporary education of Jewish students as the scientists, mathematicians, and professionals of the future.

In April 1929, Einstein had received a famous telegram from New York City Rabbi Herbert S. Goldstein: “Do you believe in God? Stop. Answer paid 50 words." To which Einstein replied, "I believe in Spinoza's God who reveals himself in the orderly harmony of what exists, not in a God who concerns himself with the fates and actions of human beings." At that point, Einstein almost certainly did not know about Yeshiva College, with which Rabbi Goldstein was affiliated.

Einstein probably first learned of Yeshiva College in November 1933 when Mendel Gottesman sent him a Yeshiva Endowment Foundation yearbook just one month after Einstein moved to Princeton and just five months after Yeshiva College had graduated its first full class. On November 21,1933, Einstein thanked Gottesman and expressed his conviction that “the Yeshiva College is of great importance for the preservation of the Jewish tradition and for the deeper spiritualization of the Jewish youth in general." On December 1„ "elated ...over the wise and friendly words of Dr. Einstein," Yeshiva College President Bernard Revel informed Gottesman, "We are sending Dr. Einstein a copy of all the issues of Scripta Mathematica; and we hope that, as he learns more of Yeshiva College and is unique work, we may more fully win his friendship and cooperation."

Having originally planned to invite Einstein to a fundraising dinner in 1934, Revel instead invited him to the 1934 Commencement on June 16. Einstein declined, but he did provide a strong statement of support for the College, this time mostly on the basis of its secular education of Jewish students. To accommodate Einstein's schedule, the College invited him once again to receive an honorary degree, this time on October 8 at the Opening Exercises for the new academic year. On April 27 Einstein accepted the invitation in principle in a letter to Herman Bernstein, chair of the Einstein Reception Committee. On April 30, just 3 days later, Einstein asked Revel to consider Arnold Lowan, a Columbia Ph.D. candidate and a fellow at the Institute for Advanced Study, for a position teaching physics or math at Yeshiva College. Soon Lowan was hired, and he taught at Yeshiva College for decades. Overall, the various strands of the relationship between Einstein and Yeshiva College, based on mutual interests, ere rapidly growing not only more numerous but stronger as well. 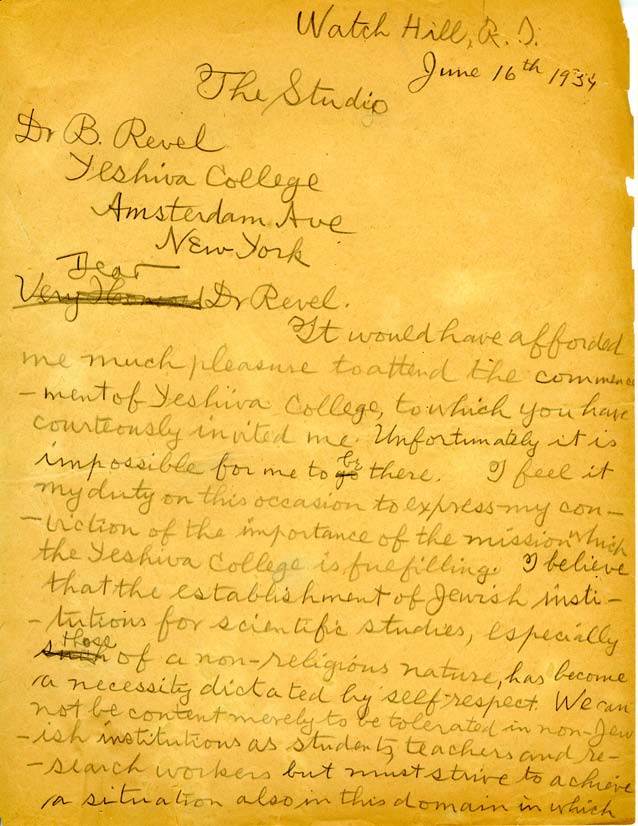 Manuscript letter in English
Credits: Yeshiva University; © The Hebrew University of Jerusalem
Manuscript letter sent to Revel by Einstein from a vacation cottage in Watch Hill, Rhode Island, and dated June 16, 1934, the day of Yeshiva College’s third commencement.  Having declined the invitation to attend on that occasion, Einstein sent this statement of support, clearly meant for public use.  In many respects it anticipates the brief address he delivered on October 8 and reflects his growing knowledge of the institution.  The handwriting may be that of Helen Dukas, Einstein’s devoted secretary during his entire time in America. 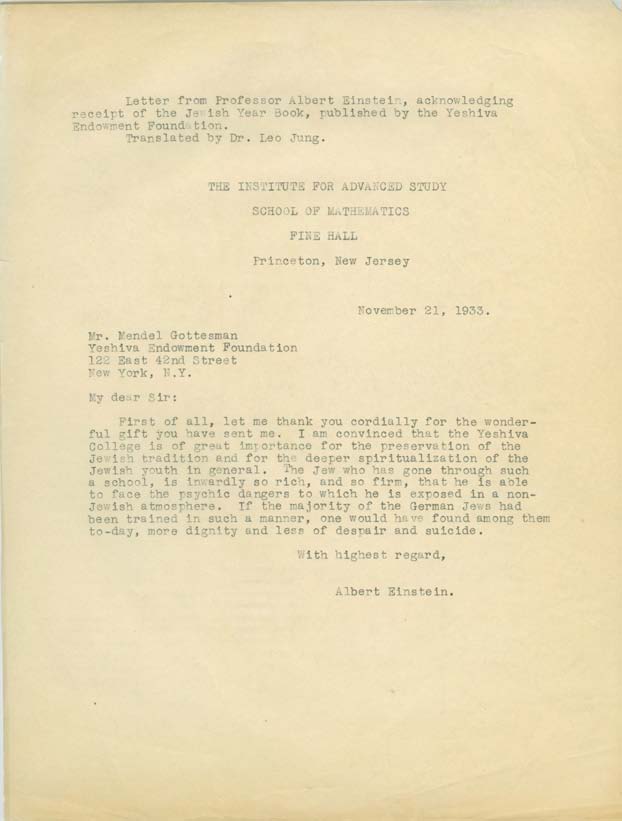 His First Letter to Yeshiva College

Typescript: English translation of German letter
Credits: Yeshiva University; © The Hebrew University of Jerusalem
Einstein wrote this letter of thanks to Mendel Gottesman on November 21, 1933.  It marks the first time Einstein expresses support for Yeshiva College and the first time he knowingly communicates with one of its representatives.  It is clear from the letter that he has registered the religious aspects of the institution more strongly than the secular aspects.  Earlier in November, Gottesman had sent him a “Yeshiva Endowment Foundation year book” which may well have emphasized the Yeshiva rather than the College.  Gottesman, a long-time, major supporter of the Yeshiva and the man for whom the Mendel Gottesman Library is named, had initiated the Foundation in 1927 with a gift of $50,000.  This translation from the German is by Prof. Leo Jung, proved helpful to Revel in all sorts of ways during the early years of the College.  With Einstein’s permission, the College used this English translation of his words in connection with fundraising events, including its annual dinner at the Hotel Astor on December 8, 1935. 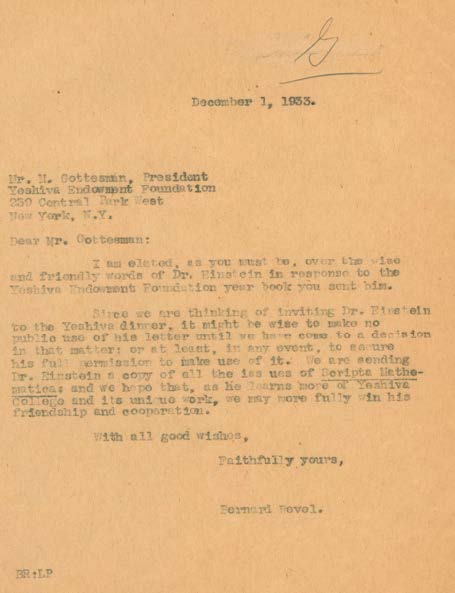 Typescript letter:  Revel’s copy
Credit: Yeshiva University
Having read a copy of Einstein’s letter of November 21, Revel writes Gottesman on December 1, 1933, to express his joy over Einstein’s support for the College and to hope for a growing friendship in the future. 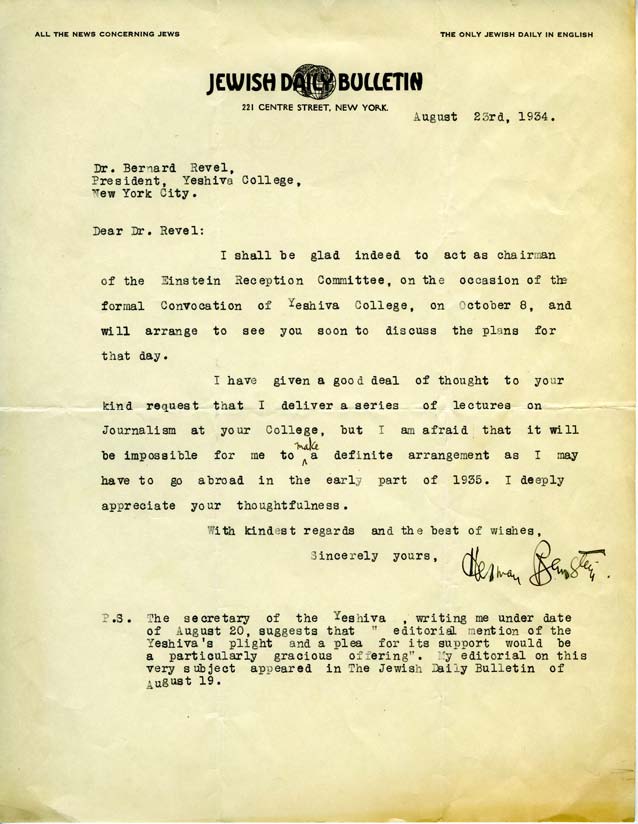 Typescript letter
Credit: Yeshiva University
Journalist, author, and diplomat Herman Bernstein (1876-1935) served as a contributing editor of the Jewish Daily Bulletin, the only daily in English focusing on Jewish issues.  Einstein read and enjoyed his articles, many of which appeared in a column called “Now” on the first page.  Einstein may also have known of Bernstein as the author of The History of a Lie, one of the three earliest exposés of the infamous anti-Semitic Protocols of the Elders of Zion as a forgery.

In this letter Bernstein agrees to chair the Reception Committee for Einstein in connection with the granting of the honorary degree on October 8, 1934.  That day he personally drove Einstein from Princeton to Yeshiva College and back, and before reading a translation of Einstein’s address, he made some admiring remarks, including this one:  “The Yeshiva College . . . in honoring the foremost scientist and humanitarian, and the greatest Jew of our times, is honoring itself and the Jewish people.”