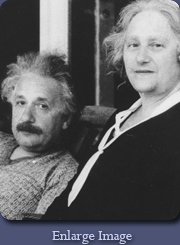 Anti-Semitism: Einstein had already spoken out as a pacifist and internationalist during World War I. As his fame accelerated beginning in 1919, German nationalists accused him of practicing "Bolshevist" or "Jewish" physics and threatening "Aryan physics." On August 24,1920, anti-relativity lectures of a distinctly anti-Semitic hue took place in Berlin's Philharmonic Hall. As the Nazi party rose to power in the late 1920s and early 1930s, Anti-Semitism took on increasingly violent and deadly forms, so Einstein began to consider the option of leaving Germany. Beginning in 1929, the Einsteins spent more time at Caputh, their new country home. In December 1931 Einstein began the first of three annual visits to the California Institute of Technology in Pasadena as a visiting professor. He also accepted a part-year position at Oxford.

Berlin to America: On January 30, 1933, Von Hindenburg appointed Hitler as chancellor. In response to the burning of the Reichstag on February 27, Hitler blamed the Communists and declared martial law. On March 14, 1933, his 54th birthday, Einstein learned that troopers had searched his Berlin apartment during the first of five raids in two days. On March 20 soldiers raided his country home in Caputh, ostensibly looking for weapons hidden by "Communists." In Belgium in late March, Einstein renounced his German citizenship for the second time and sent off his resignation from the Prussian Academy of Science. On April 2nd his Berlin bank account and apartment were seized. The next six months Einstein spent in Belgium, Switzerland, and England, weighing his many options and rethinking his commitment to pacifism. Together with Sigmund Freud he published Why War? and, in a major speech at Royal Albert Hall, he called on Europeans to fight fascism in order to save civilization. His commitment to pacifism in theory undiminished, he had come to believe that the other European powers should use force to resist Germany's buildup of military power.

On October 17th, 1933, Einstein arrived in New York and traveled to Princeton directly with his wife Elsa to take up his appointment within the Institute for Advanced Study. Though he considered many alternatives in the early years, he left America only once, in 1935, to travel to Bermuda in order to apply for permanent residency, and he became an American citizen on October 1, 1940.

Meanwhile, back in Germany: With his life literally in danger in 1933, Einstein had left Germany just in time. From 1934 on, anti-Semitic nationalists took over the academy, dominated public and popular discourse, and resorted at times to assassination. Ideological extremism led to ever more murderous actions. Nationalist intellectuals, for their part, reached ever more ridiculous conclusions. In 1941, with the Final Solution on the horizon, second-rate German scientist and nationalist Bruno Thüring exclaimed in a book entitled Einstein's Attempt to Overthrow Physics that the Jewish plot to relativize all concepts and values must lead to chaos!"

Elsa and Albert at Home in Caputh

Photo
Credit: AIP Emilio Segrè Visual Archives
Einstein and his second wife Elsa relaxing at their recently built country home in Caputh circa 1930.  In 1929 the city of Berlin planned to honor Einstein by giving him a house it owned on the banks of the Havel River, but the legitimate lessees refused to leave.  Then the city tried to give him a nearby plot of land, but pre-existing lease restrictions would have prevented the Einsteins from building on it.  When Berlin offered to purchase a plot of land of the Einsteins’ choosing, the Einsteins found one in Caputh, a small village four miles south of Potsdam and within easy reach of Berlin.  Unfortunately, nationalists objected to Einstein as a Swiss Jew, delaying and endangering the goodwill gesture.  Declining the gift, Einstein then spent a large proportion of his savings to do for himself and his wife what Berlin had originally offered to do for him.  He referred to the whole sequence of events, including the outcome, as “a bust, though a nice one.”  Konrad Wachsmann, who later worked with Gropius at the Bauhaus on prefabricated modern buildings, designed for them an unpretentious but spacious cottage looking out over the red roofs of Caputh, the surrounding forest, and the Havelsee.  From 1929 to 1932 the house was Einstein’s favorite spot, partly because he could spend hours sailing on the Havelsee in his new sailboat, a birthday present that did reach him from students and a bank.  In November of 1932, as he and his wife left the cottage to head for Berlin, Antwerp, and then Cal-tech, he turned to her and said, “Take a good look around.  You will never see it again.” [“Dreh dich um.  Du siehst’s nie wieder.”]  Sure enough, the following year, the house was first searched, then seized, and the Einsteins never returned to Germany.

Newspaper article
Credit: © 1930 by The New York Times Co.  Reprinted with permission.
On February 16, 1930, the New York Times published this short, humorous, acerbic quotation from the address Einstein made in 1929 when “the Sorbonne recently conferred an honorary degree upon him.”  An earlier use of a similar joke was in an article in the London Times:  “Today in Germany I am called a German man of science and in England I am represented as a Swiss Jew.  If I come to be regarded as a bête noire, the descriptions will be reversed and I shall become a Swiss Jew for the Germans and a German man of science for the English!”  While quips like these reflect Einstein’s full awareness of anti-Semitism in Germany and his frequent tendency to air his thoughts regardless of the political consequences, they also reflect a willingness to live with conditions in Germany that would disintegrate in 1933 with Hitler’s accession to power.

Newspaper article
Credit: © 1933 by The New York Times Co.  Reprinted with permission.
On March 21, 1933, the New York Times reported on the Nazis’ discovery of a bread knife as the deadliest weapon they unearthed during their raid on Einstein’s home in Caputh on March 20.  The article goes on to report “the elimination of Jews from responsible positions,” including physicians in hospitals and judges in criminal courts, and it quotes at length from a piece in the Frankfurter Zeitung which questions some but by no means all of the new policies and methods of the National Socialists.

Original pencil drawing
Credit:  Prof. Jim Vrettos
On April 14, 1935, Einstein's 56th birthday, he spoke at the Hotel Pennsylvania to help celebrate the 800th birthday of Maimonides.  Other speakers at the event included Prof. Harry A. Wolfson, the first chair of a Judaic Studies department in America, and Prof. Leo Jung, who taught ethics at Yeshiva College.  Current Yeshiva College instructor Jim Vrettos' mother, Luba Schiff, a 20 year old taking classes at the Art Students League, attended the celebration and made this pencil drawing of Einstein while listening to his talk.  Afterward she went up to Einstein to express her appreciation for his remarks.  When she showed him her drawing, he signed it, gently pulled her nose, and said, "You keep drawing, young lady.  You’ll be a wonderful artist some day . . . ."  It was in May 1935 that he went to Bermuda to apply for permanent residency in America.  Luba Schiff Vrettos is now 90 and living in Denver.  Seven years ago, The Mizel Art Center at the Denver Jewish Community Center mounted an exhibit devoted to her work:  “The Discovery:  Luba Schiff’s Paintings and Drawings 1930s – 1980s.”